Sometimes, I get an idea in my head – and that’s it, the idea HAS to be done. It doesn’t matter whether that is going to take me all day and all night (and then all day and all night again) to complete whatever hair brained challenge I have set myself, or whether it is something with a long-term plan – it will go on ‘the list’.

The husband does laugh, as he is aiming to be ‘paperless’ – using apps to write lists, schedule and remember tasks, whereas I HAVE to have my notebook. And it is currently an Anthropologie notebook that says ‘the best is yet to come’ and, my bright, happiness bringing, lime green Lamy fountain pen. So specific! However, writing everything down in that notebook that needs to be done that day, week, month, year – it makes me focus! I cross off what has been achieved and I remember what I need to be doing next. Heaven forbid if it ever got lost!

My ‘crazy’ crafty ideas often surface at about 2am when up resettling our little man whilst trying to stay awake in the bit once he is asleep, but I cannot leave the room. The trouble is, I then can’t stop thinking about it – so I drift off again at 3am still wondering about things like ‘but how would I make that?’ or ‘I wonder if Hobbycraft sell X, Y, and Z’ – ‘maybe I could get there tomorrow somehow…’

That is precisely what happened with World Book Day.

A simple poster spotted at nursery – a reminder to come as your favourite book character on Thursday 7th March - World Book Day!

First I was thinking, what do we already have that could be worn and fit in to one of his many favourite book themes? Or, could maybe be slightly tweaked? Then, out of nowhere came the idea that I could try and replicate The Very Hungry Caterpillar Butterfly… Well, once it was in my head – there was no going back. I had set myself my own high standard challenge and I HAD to make it. I started to think about all the colourful fabrics we had in the studio and how I could incorporate lots of prints and patterns to try and match the beautiful and eclectic drawings in the Eric Carle iconic children’s book.

In the morning, I measured our little man to see if I could then make the wings to his ‘full height’, like the illustrations. I raided the remnants bin, and started to cut the shapes out. Effectively, trying to 'draw' with fabric.

It soon became apparent I had set myself quite a task to cut and applique on all the different shapes, colours and patterns, but I was enjoying myself… and isn’t that kind of the point with craft?!

As the day and then evening wore on, the first wing began to take shape – and I could see how big it was going to be! I started to wonder if the wings really could be worn by a toddler… As much as they would match his height – maybe they would be just a pain for him to carry round? (That’s if I could even get him to put them on!)

The beauty of the amazing artwork in The Very Hungry Caterpillar – is they are so unique, and the two sides of the butterfly don’t match! So, I could be creative with what fabrics to pick and choose for each side.

Once the wings were now initially made, the next challenge was how to make them into something that could actually be worn. I thought about ribbons to pull around the shoulders. But, they would likely slip off the shoulders. So then, maybe attaching them to an outfit could work? But as I wanted them to be worn by either toddler, or likely adult, it needed to be something flexible.

The next day, off to Hobbycraft we went... elastic! – I suddenly thought about how fairy wings are assembled – and decided I would make a central panel to attach the wings to, and some elastic loops to swiftly enable the wings to be taken on and off as and when pleased!

I also found some Vilene fabric interfacing. Normally used for things like curtain pelmets – but it was perfect! This could be attached to the fabric wings to make them stiff, and essentially make the design stick out like actual wings! I also picked up some really bright blue felt – lovely and soft, and a nice plain contrast to the rather crazy ‘front’, to put on the back behind this new interfacing.

Evening 3. I lay out the fabric wings on to the interfacing and backing felt, then sewed around the edge and then basically just trimmed to the shapes required!

Evening 4. The final evening (also note, the night before World Book Day so it had to get finished come hell or high water!) I made a small and simple rectangular panel out of some coordinating fabric, with elastic loops tucked inside to allow the arms to go through. I also used some more of the interfacing inside to make this panel nice and strong – before simply sewing the edges of the wings on to it. DONE!

It really isn’t my ‘finest’ of sewing – most of the fabrics have ‘raw’ edges, and there are places where it could be improved – but does it really matter? It hopefully looks like the book, it will hopefully bring little man some joy - and importantly, I really did enjoy making them!

I then did honestly proceed to wear them round the house for about an hour – for no reason other than because I could! Within this hour, I also tried to work out what I could do if he wouldn’t wear the wings. I mean, in all honesty – no secret about it, I would love to wear them for nursery drop off – but it would actually mean he didn’t have a costume! And, I am not sure the point of all of this, is for the Mummy and Daddy's to be dressed up, but the kiddiwinks not!!!

Aha – well, I found his green trousers, and we definitely have a green stripey top. Perfect for a little caterpillar.  AND THEN – I remembered  (and then very handily FOUND!) that we were given a Very Hungry Caterpillar hand knitted hat for when he was a baby. Would it fit?! Unlikely but I could give it a go if needed in the morning…

I asked little man to try on the wings – he looked at me like I was crazy but did let me put them on him. What he actually wanted to do was take them off and look at all the colours! He looked so lovely with these huge colourful prints emerging from his beautiful tiny body. But, within 5 minutes – they were off. I put them on, and he laughed – so, if it made him smile – that I suppose was worth it in all reality – who cares who wore them. He was happy.

Into the green 'outfit' for him, and by some crazy knitted-stretchy miracle, the found Very Hungry Caterpillar baby hat did indeed (just!) fit!

So, we rocked up to nursery with him as a caterpillar, and me as the butterfly. It kind of worked! #teamwork

I left the wings at nursery for staff to use for the day if they wanted, and apparently lots of the children liked all the colours and textures on them! 🙂

So, that is it for this year, World Book Day – done! It has been crossed off 'the list'.

The trouble is, I have now set a precedent. What will I make next year?!

In the meantime, at the point of collecting him from his day at nursery, the World Book Day costume sign had come down – and a new one put up in it’s place.

I had best get my thinking cap on… 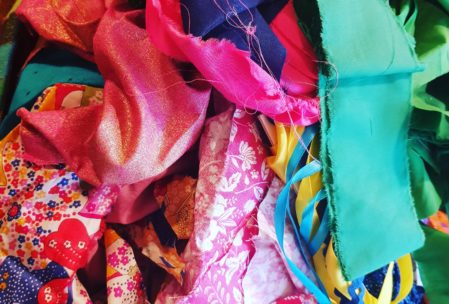 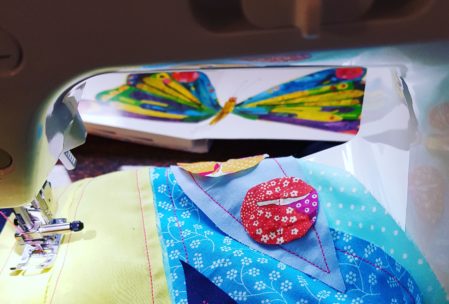 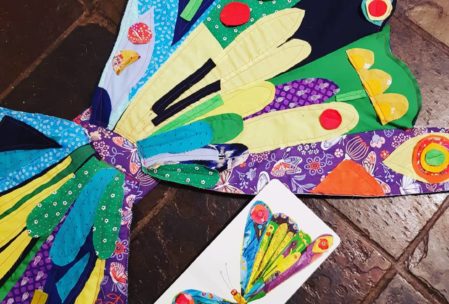 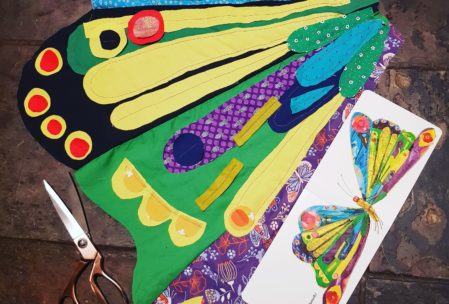 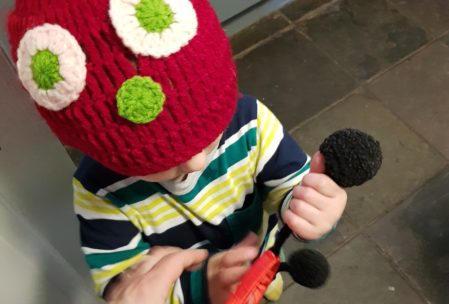 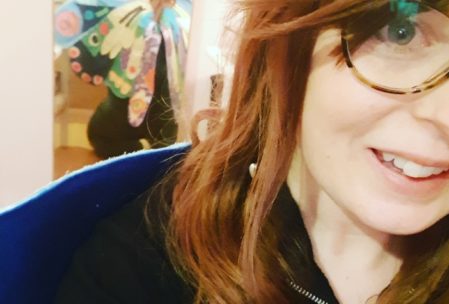 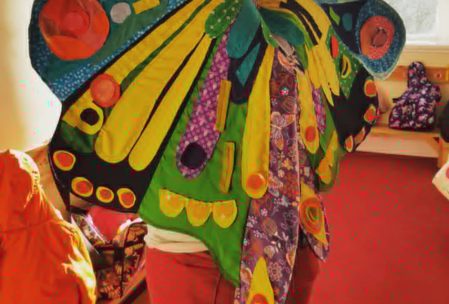 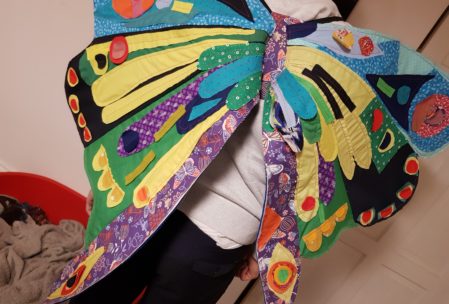 The Crafty Lass does… COLOUR! The ‘ultimate’ handpainted playroom!

When we moved into this new home, one of the (many) selling points, was a little room just off the hallway next to the kitchen – destined to be a playroom.  It was the first room we started to decorate – and at one point I thought it might be the last too…

We wanted it to be fun, vibrant, a real ‘playtime’ room. Basically somewhere he could enjoy, make a mess – and realistically also, somewhere all the toys could be shoved at the end of the day!!

Of course, there were many Pinterest ideas – I looked into a ‘zoo’ theme, and had visions of animals all over the walls. And dinosaurs with a similar concept – but nothing quite seemed to grab my full inspiration. Until I saw THIS image – even with the title ‘How to Create the Ultimate Playroom’ – perfect! – designed by Minneapolis interior designer Lucy Interior Design. When closer inspected – it turns out it was wallpaper… but I thought perhaps I could paint it?? God knows why… I thought it would be FUN! And it was – well the first few triangles were anyway…

With a little (let’s be realistic, alot) of help from The Husband working out angles, measurements, borrowing his spirit level/metal ruler/tape measure – we soon worked out how I would get it all to fit on the wall space. Now it was up to me to draw it all out and inspired by my new colourful go to Pinterest inspiration – and also our ‘Baby Sensory‘ classes that we attend every week – it was off to B&Q for a many a tester pot picking, and sketching out how it would work!

I LOVE colour – bright, unabashed colourful prints were my go to in my Printed Textile Design degree, and more importantly for this project – babies also love colour and pattern! We just knew it was the right choice.

Once the triangles had been drawn on to the wall, which actually took quite some time! It was ‘simply’ (ha!) a case of taping up each one, painting, allowing to dry, re-coat (each triangle took 3-4 coats!), remove tape, move to the next triangle/repeat… Hence, why this process has taken 3 months! Well, that and juggling life and many other craft projects/decorating projects/setting up the new craft workshops space…

Now that it is done, and not wanting to blow my own trumpet – I cannot stop staring at it! I of course, can see areas that aren’t just quite 100% perfect – but in reality, who else is going to notice?? I had to draw a line (haha) under it somewhere – so it is finally, and colourfully, DONE. End of story! No more ‘I managed to paint 9 triangles today!’ conversations – now just to enjoy it. I think you can tell – of course I did this for our little one – but yes, I am also in there alot playing with him every day, and it makes MY spirits lift too!

I feel this is a style that will grow with him – it will suit him at all ages. It has taken longer than expected, there were times when I wish I hadn’t started – but equally it was a great challenge! And, would I do it again? Absolutely! Will he thank me for the countless hours working out angles, painting, pondering which colour should go where? Probably not – but at least he has somewhere he knows he can have FUN!

Do you have a playroom? Or somewhere you’ve painted a wall mural? I would love to see! 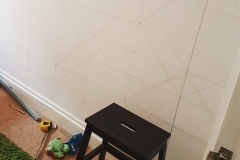 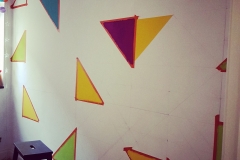 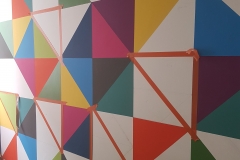 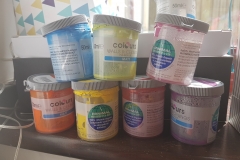 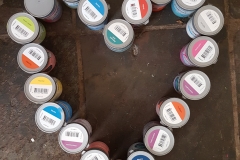 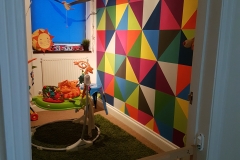 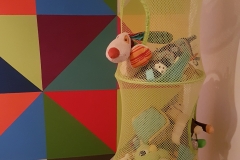 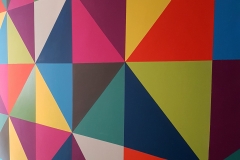 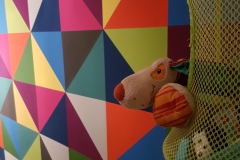 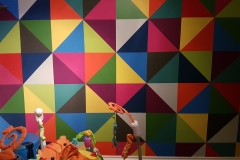 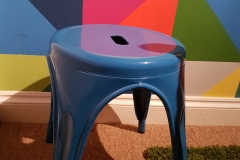 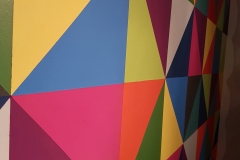 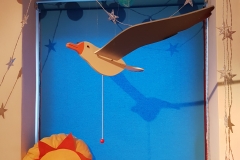 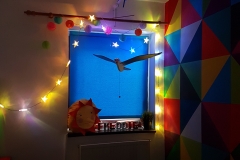 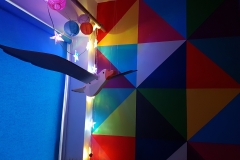