It has certainly been that… what an adventure it has been!

2nd October 2017 – we sold our first ever ticket for The Crafty Lass workshops at the Old Grain Store workshop studio… part of me feels like it was a lot LOT longer ago, and the other part says where has that year gone?!

The moment that someone bought that ticket, the first ticket, took a leap of faith – booked, paid, wanted to come. What a heart soar, what a joyous moment to treasure.

However – you know what? I feel like that for every. single. booking. Every. Single. One.

For every crafter that wants to come and visit, for every crafter that brings their friend, that recommends us, that leaves full of tea and biscuits and happy with their makes and creates – it makes me so so happy. Our work is done. Well, actually, as every self employed business person knows, the work is NEVER done!

We are absolutely looking forward to Christmas this year – we have a much wider range of workshops on offer and are ever so grateful to the people who have reserved their spaces. Most classes are amazingly already sold out – which for the 1st October, is some pretty organised crafters! We are actually hosting our first Christmas workshop as a private booking this coming Sunday 7th October for an old dear friend and his family… travelling all the way from Bristol!

The countdown to Christmas is ON!

I love Christmas. I am pretty sure I have said this in every single The Crafty Lass blog post – it always manages to sneak its way in somewhere to my writing…

And, with that love for the festive side of our year – what better way to count down to the big day than with a crafty ADVENTure and a craft advent calendar?

The Crafty Lass® ADVENTure has been in design stages for approximately two years – so when the opportunity came up to collaborate with such a renowned craft company as Craft Buddy – it was an opportunity not to be missed! The inspiration for the contents of the calendar have come from everything you might need to personalise your Christmas – little details to make gifts, make your home festive, your Christmas table, present wrapping, even decorate your Christmas clothes – and generally get very Christmassy! The main focus includes your ‘classic’ Christmas craft items, but also some beautiful and unusual items to make things extra special. And, one of the most magical and important qualities of the calendar is that it has zero plastic packaging inside!

We are also delighted to be able to announce that the calendar will be for sale on Hochanda!

If you had asked me this time last year – would I be working on my own product designs? And, would I be going back on to Shopping TV to sell said products? I wouldn’t have thought you were mad… but I would be delighted, and I am.

With the calendar – we hope that you are inspired. We hope that it allows you some little time to get creative each day. Or, maybe you might like to combine items, and save some of them up for bigger crafty makes! Who knows, you can do whatever you like!

We look forward to seeing all the makes and creates… Where will the ADVENTure take you?

One of the most special times for me at Christmas, is the decorating of the tree. 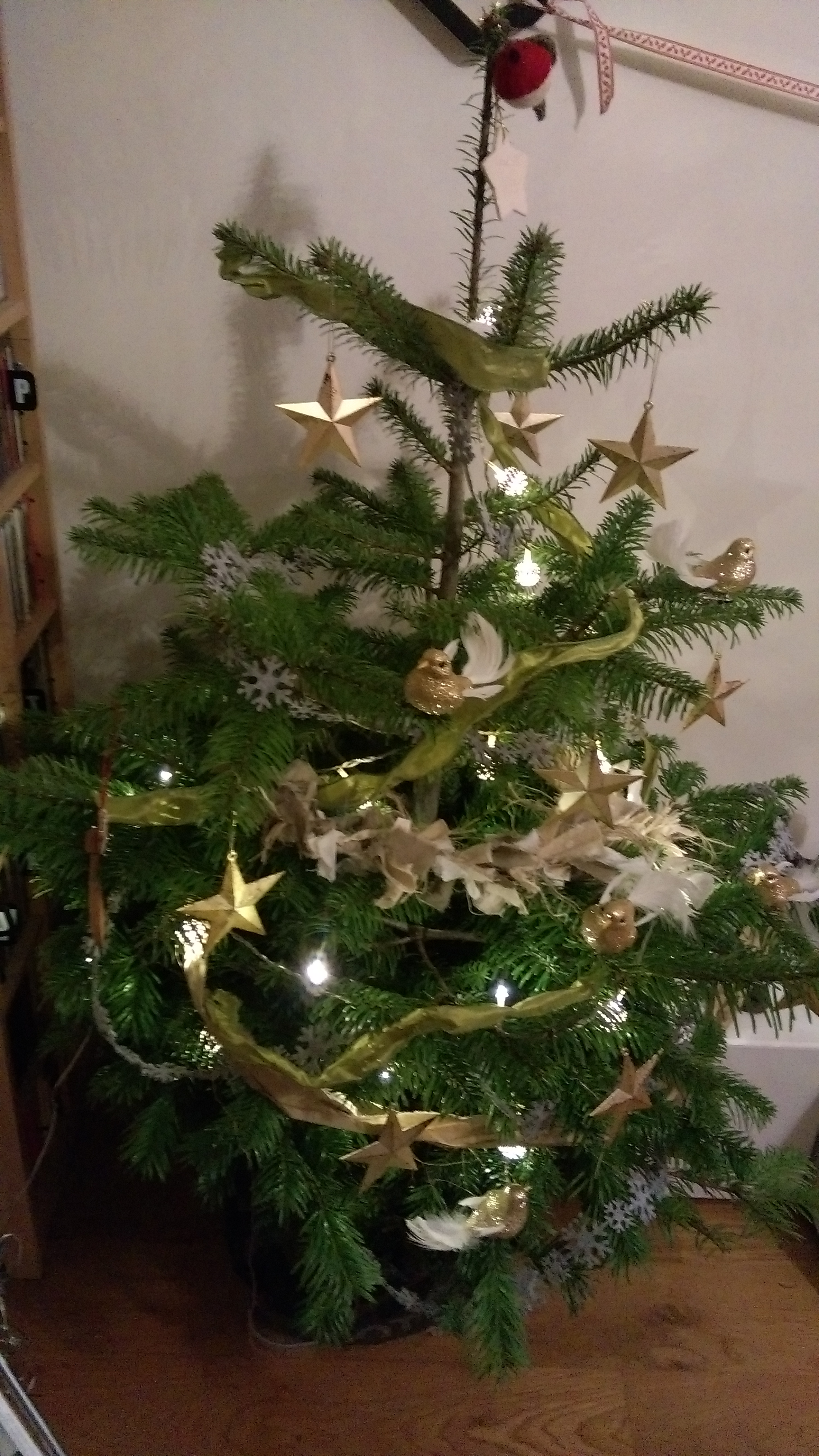 As a child – I really used to love the magic of it all – it meant if we are putting the tree up, the big day must be nearly here! Untangling the lights, looking over each bauble, the handmade decorations made and collected over the years, placing each one carefully on the branches! Mum and dad always kept everything as well – even now, I am sure they have some pinecones wrapped up in some red wool that I made as a toddler at nursery…clearly very crafty from a young age!

I love putting the tree up – but NEVER the taking down. Poor Mum used to always get that job, and Dad to put everything back into the loft.

For the last few years, we actually have had a potted tree – and yes, the same one! – we bought it one early December from the side of the road for only £15 (I haggled the seller down from £25!)… We took it home, prettied it up, and then come the New Year – we just put it in the garden to see what would happen. At some point later in the summer, I noticed – it was GROWING – new sprouts had appeared, so we thought let’s see if it will make it til Winter… Sure enough, it did – and as a special treat for us not having to buy a new one – we even bought it a new lovely ceramic pot! Now part of the family of course – it even had a name…Ned! We didn’t think it would surely get to the following Christmas but sure enough – it did – and it survived for 4 years! 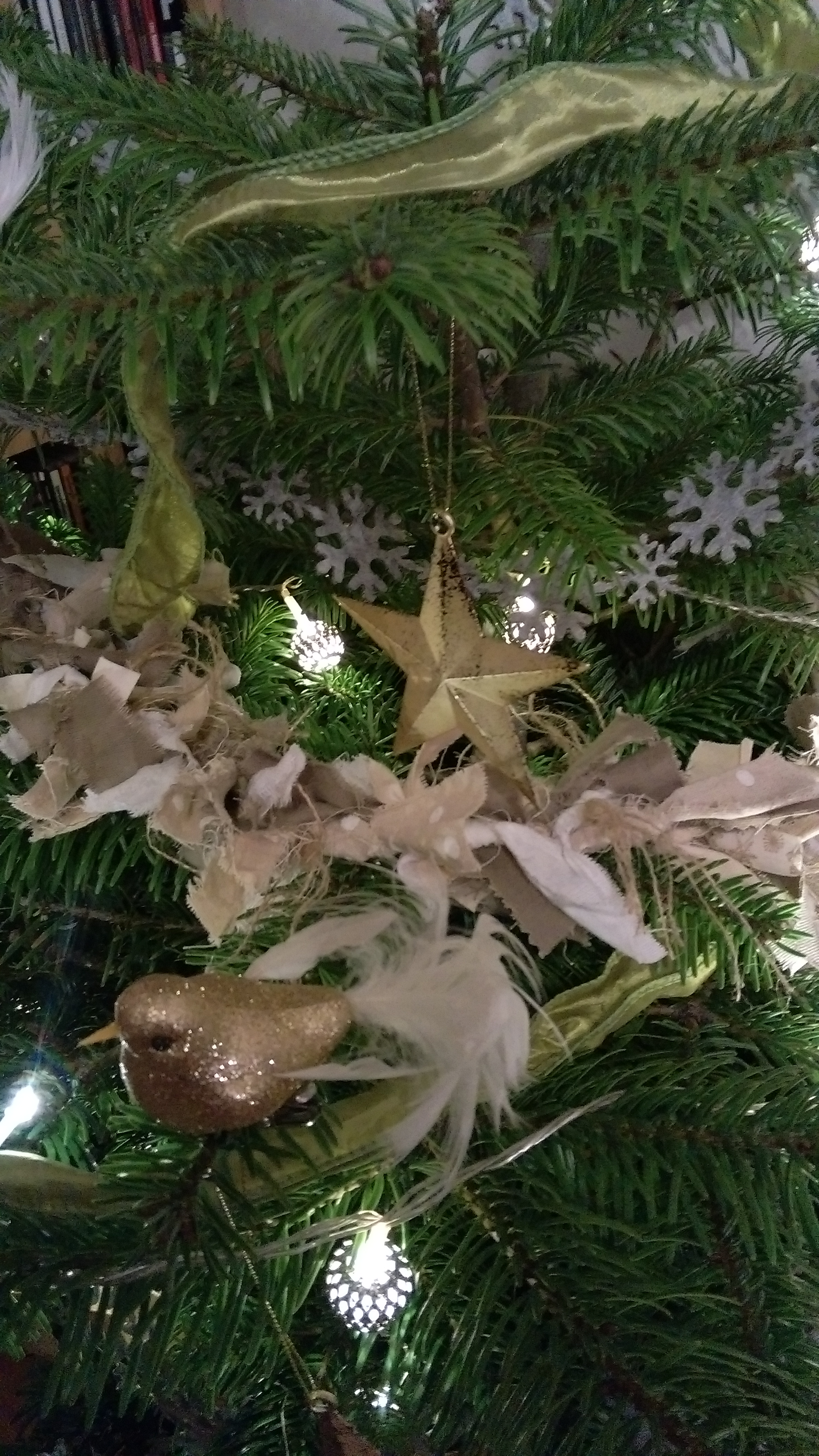 However, last year – either it decided to be naughty, or we were very unloving parents and didn’t look after it well enough, but… well, it had 1000’s of bugs growing on it, that we didn’t know about until they were all over the floor in our house. I tried to remain calm, but they were EVERYWHERE – and that was it – poor Ned – banished to the garden on Christmas Eve! Naughty Ned.
Having held a few lovely craft workshops at Claydon Christmas Tree Farm this year, I was determined to get a nice shiny and new, and certainly real one… there were so many to choose from! Part of me wanted to get a HUGE tree (for our not so huge house, so that wouldn’t have really worked) but another part of me wanted to get a potted one and try and keep this one again for a few years. As much as I wanted loads and loads of lovely huge branches to decorate, we went with a lovely small potted one. And yes, this one also has a name – Buddy!

Every year, I try and keep a ‘theme’ to the decorating – and I always think I will try something new – but invariably, I always end up with ‘Skandi’ type Christmas with reds, whites and a few golds, just continually adding to the collection every year. However, this year – I have finally done something different – new year, new start – and gone with some lovely naturals – greys, whites, and some beautiful gold birdies and large gold stars. When I went to put the tree up this week – I realised we didn’t have our normal lights – they also went into the great Christmas tree sky with Ned as they were COVERED in sap, and bugs (eww, gross!) so although I could have waited, gone out and bought some more – I didn’t of course, it had to be decorated straight away! – and so I managed to dig out some 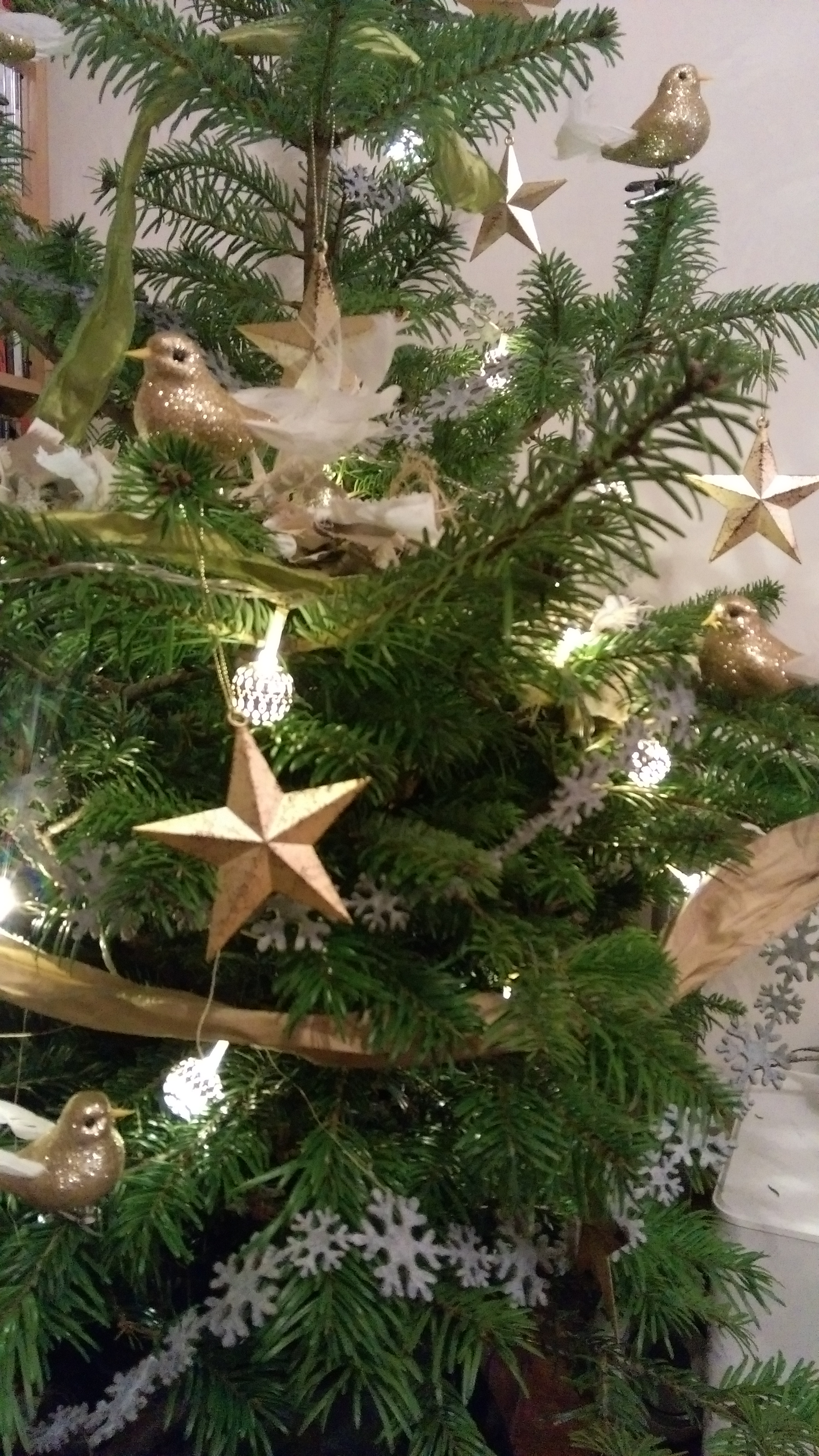 actually ‘Moroccan’ themed ones from a few parties back…which actually kind of work – so, there aren’t as many lights as normal, but Buddy looks beautiful (even if I do say so myself!). I keep referring to ‘I’ and ‘Me’ in all of this – it is of course mine, AND ‘The Husband’s – and although he doesn’t like Christmas perhaps as much as me – he is just happy that I am happy, and having a potted tree in our living room does seem to make me happy!

On that note – when you actually stop to think about it…why do we bring in a living tree into our front rooms, shove it in a corner and adorn it with lights and baubles?! There is some great history on it it all – here at www.history.com and also, all the different traditions of it all – all around the world.

This isn’t my last blog post before the year is it out, I am sure – but wherever you are, and whether your tree is real, or fake, and whether you like neutrals or reds, or crazy multicoloured, or anything and everything in between – I hope you have a magical and crafty Christmas and a creative New Year!

What a festive, and almost magical weekend of Christmas fabric wreaths making!

Saturday truly started the Christmas season for me – holding craft workshops at the brilliant Claydon Christmas Tree Farm. Until earlier this year, I hadn’t ever heard of this place – despite living in the local area for a few years now! However, I am so glad I now know… Absolutely stunning Christmas trees (British grown) – all very lush, and such variety! Real reindeer – who live on the farm all year round, and are part of the family there! There is a beautiful Christmas decorations shop full of every Christmassy thing you could imagine, a lovely little cafe with delightful bakes, cakes, teas/coffees… Santa himself is even due to visit there soon! Coming up in the next few weeks – I will be there at the following times for FREE Christmas craft ‘drop-in’ sessions… 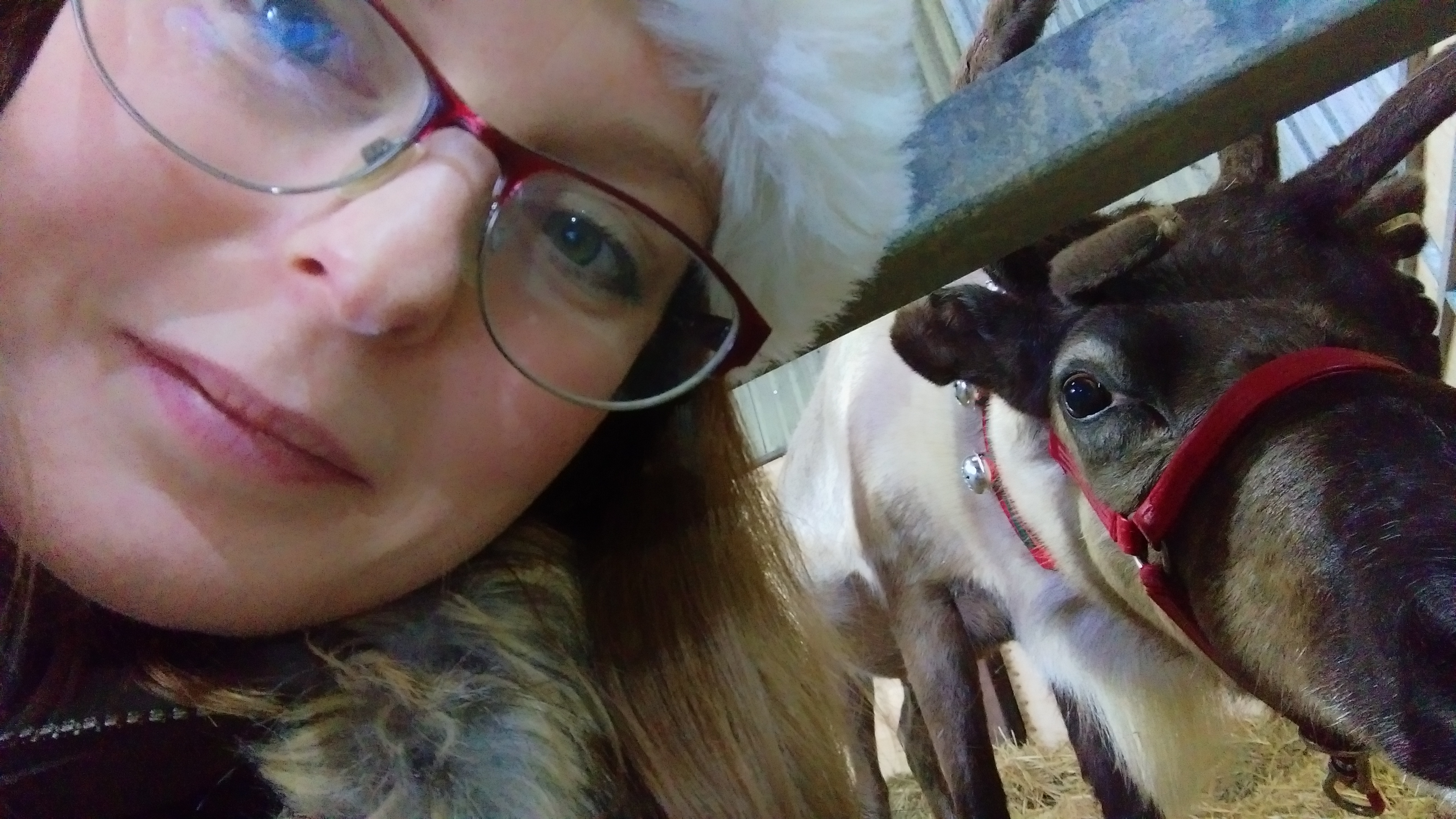 The workshops were so much fun! Everyone had a choice of fabric colours – and it never fails to amaze me that you give people the same fabrics, and yet their wreaths still always turn out different!

Some people had brought along little decorations to add into their designs – like dried pinecones, little ceramic toadstools, fake berries… just lovely to see the inspiring ideas!

It was cold, boy was it cold in the big beautiful barn – but we had plenty of tea, mince pies and festive spirit to keep us warm!

Sunday, it was the turn of the Brackley Christmas Craft and Food Fair at Brackley Town Football Club. The cold, rain and almost gale like conditions at time seemed to deter some of the punters – but we still had a steady turn out especially in the morning – and I always think at these kind of things – of course you want hundreds of people and lots of sales – but it is also about meeting like minded people – and was lovely to speak to all the other stall holders. I even picked up a few little pressies for Christmas myself! We were making wreaths on our stall (I had a lovely helper Elf with me on Sunday!) and I was also selling make your own wreaths kits – with the fabric, frames, baubles for people to take away and make their lovely wreath at home! I am looking forward to seeing the photos of their finished results! 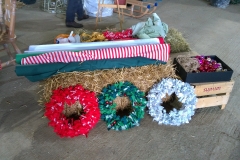 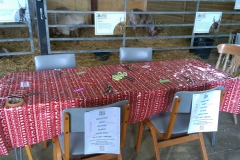 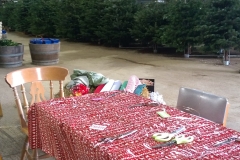 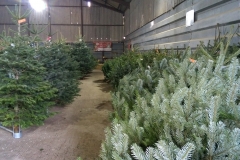 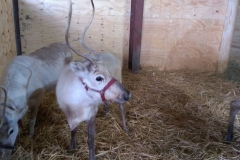 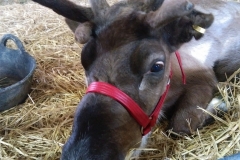 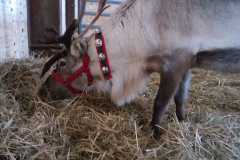 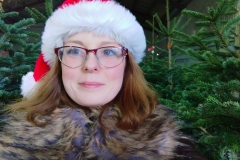 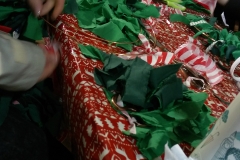 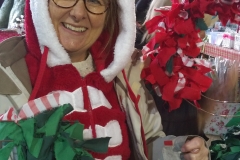 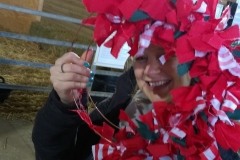 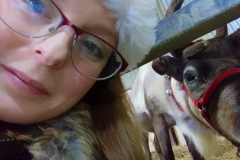 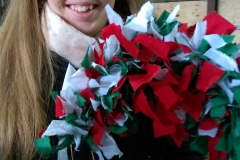 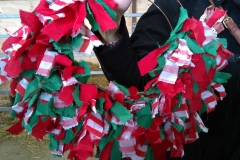 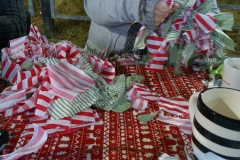 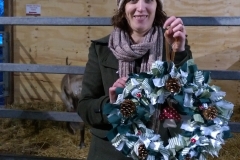 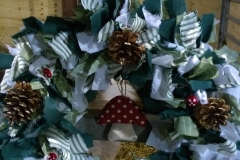 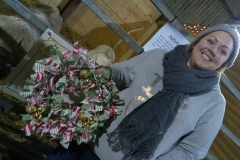 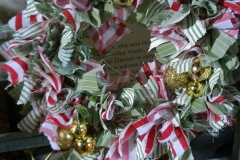 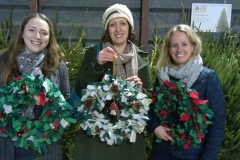 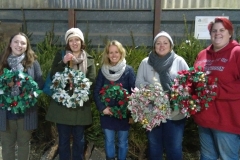